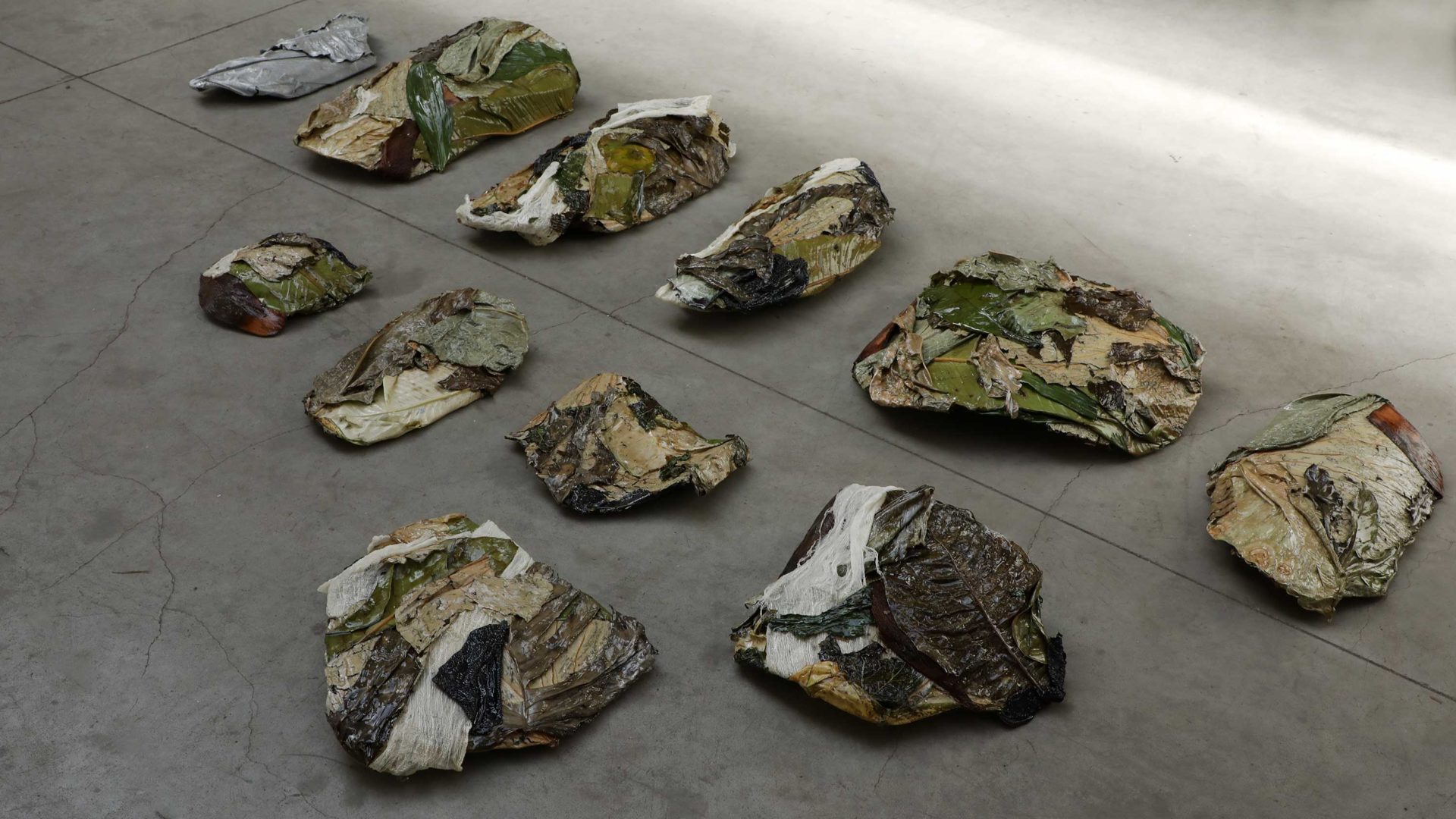 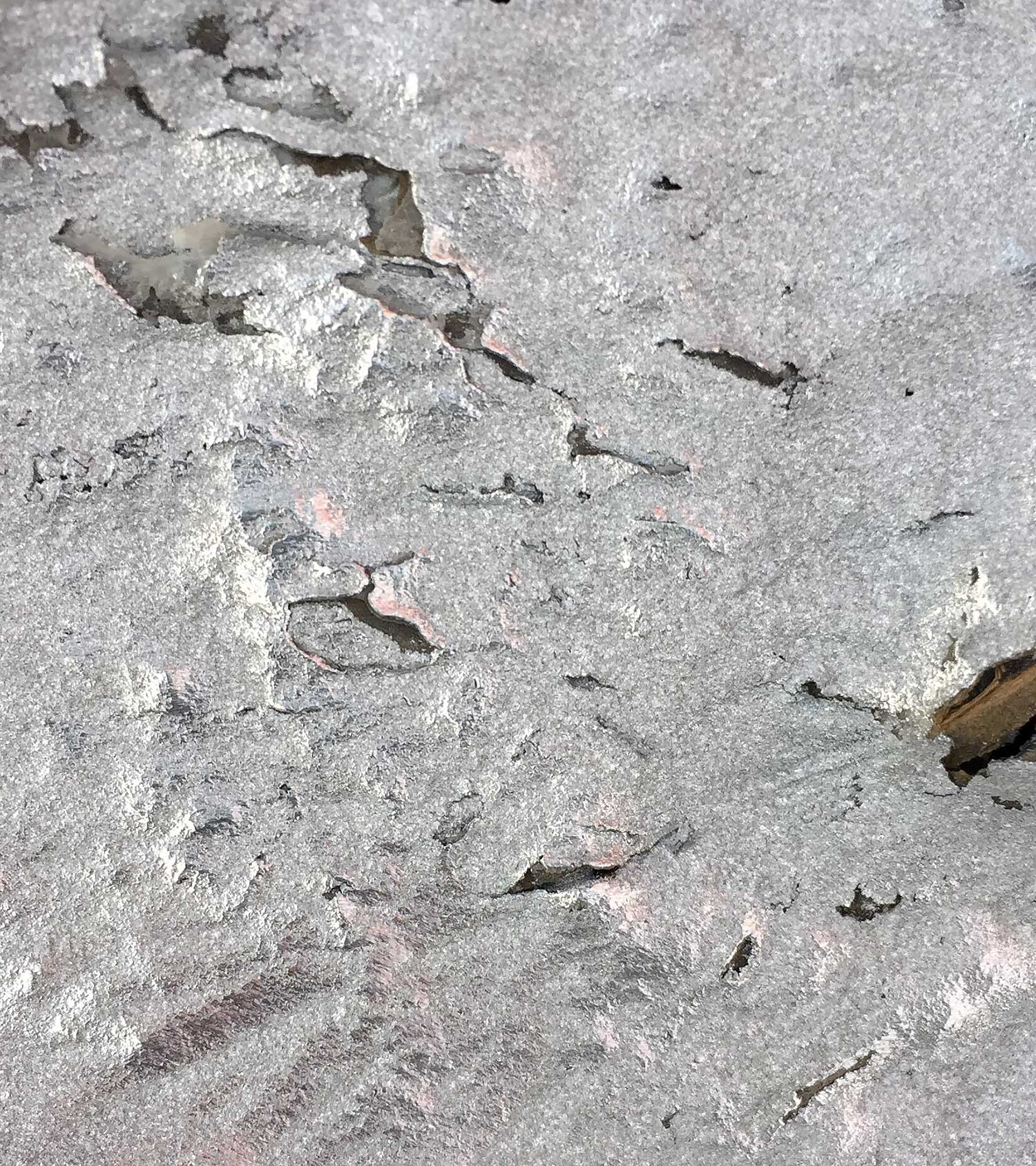 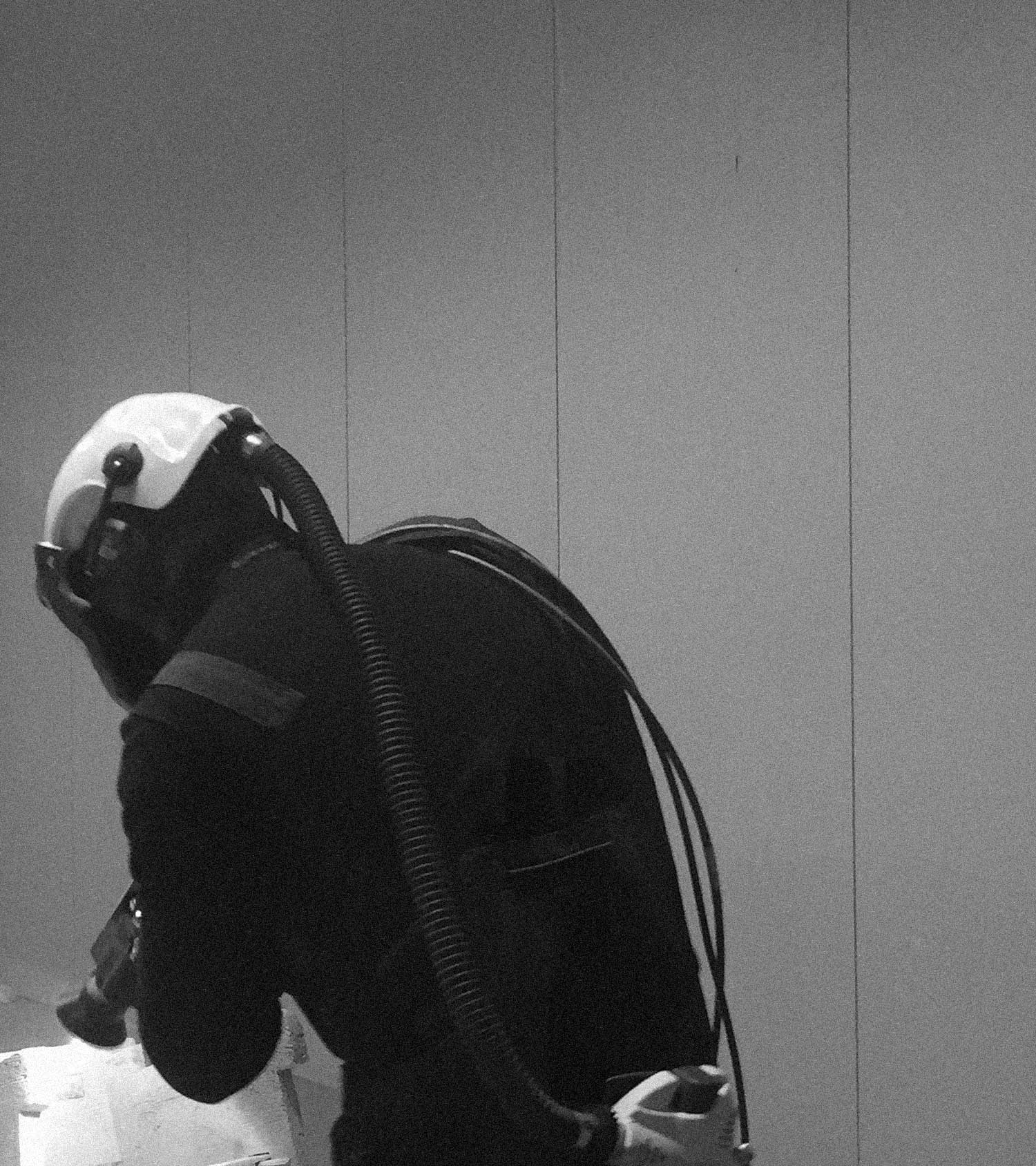 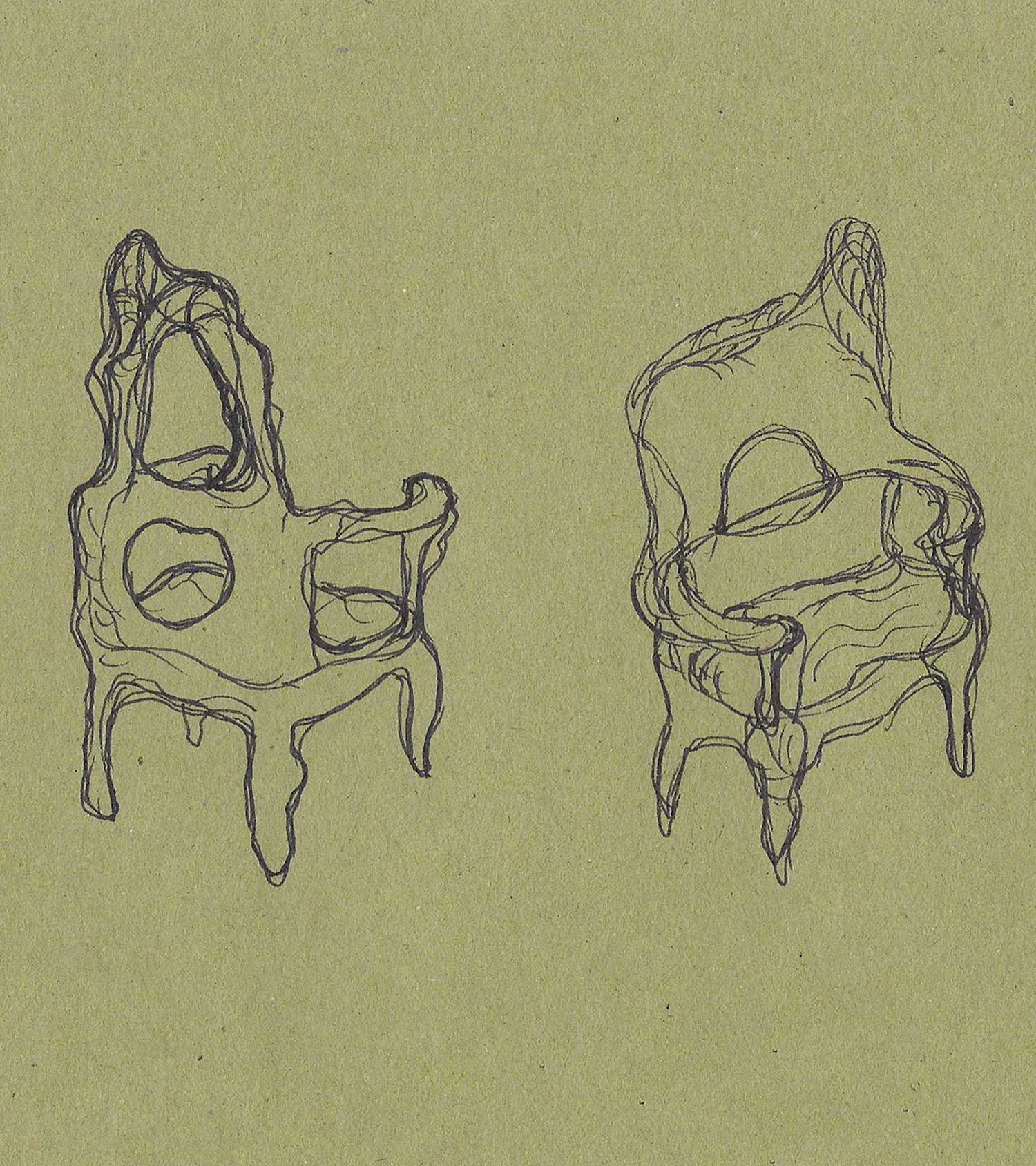 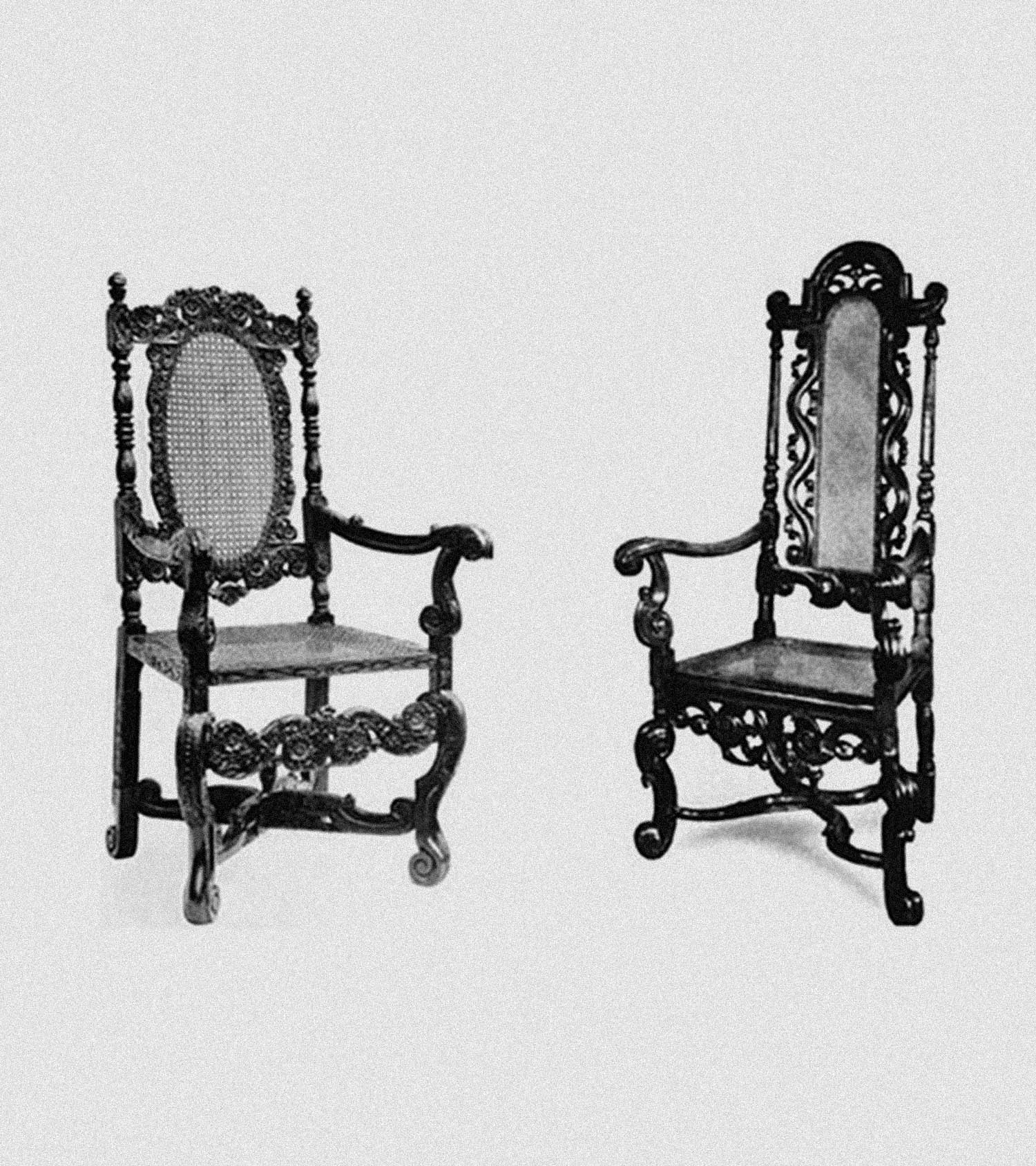 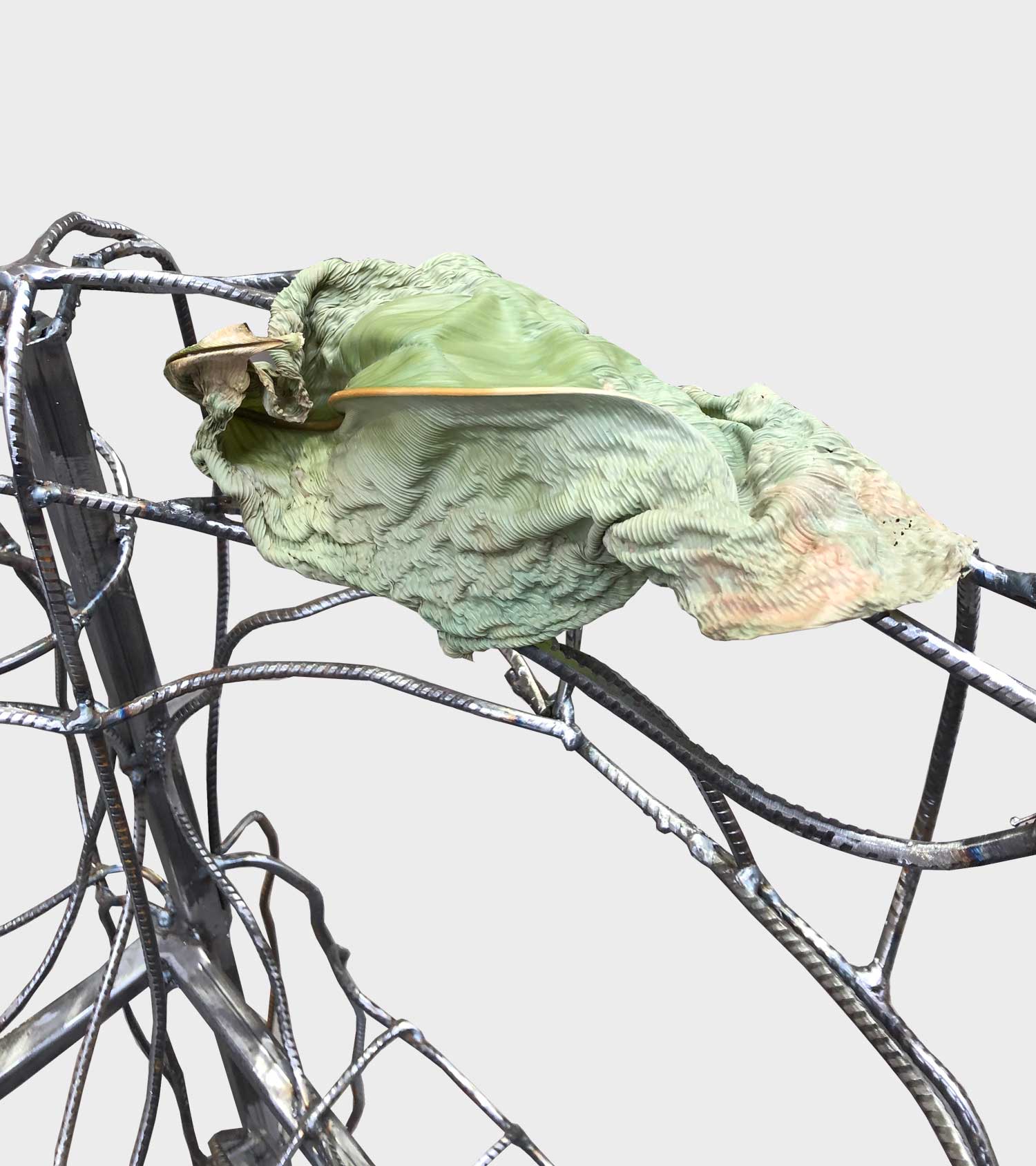 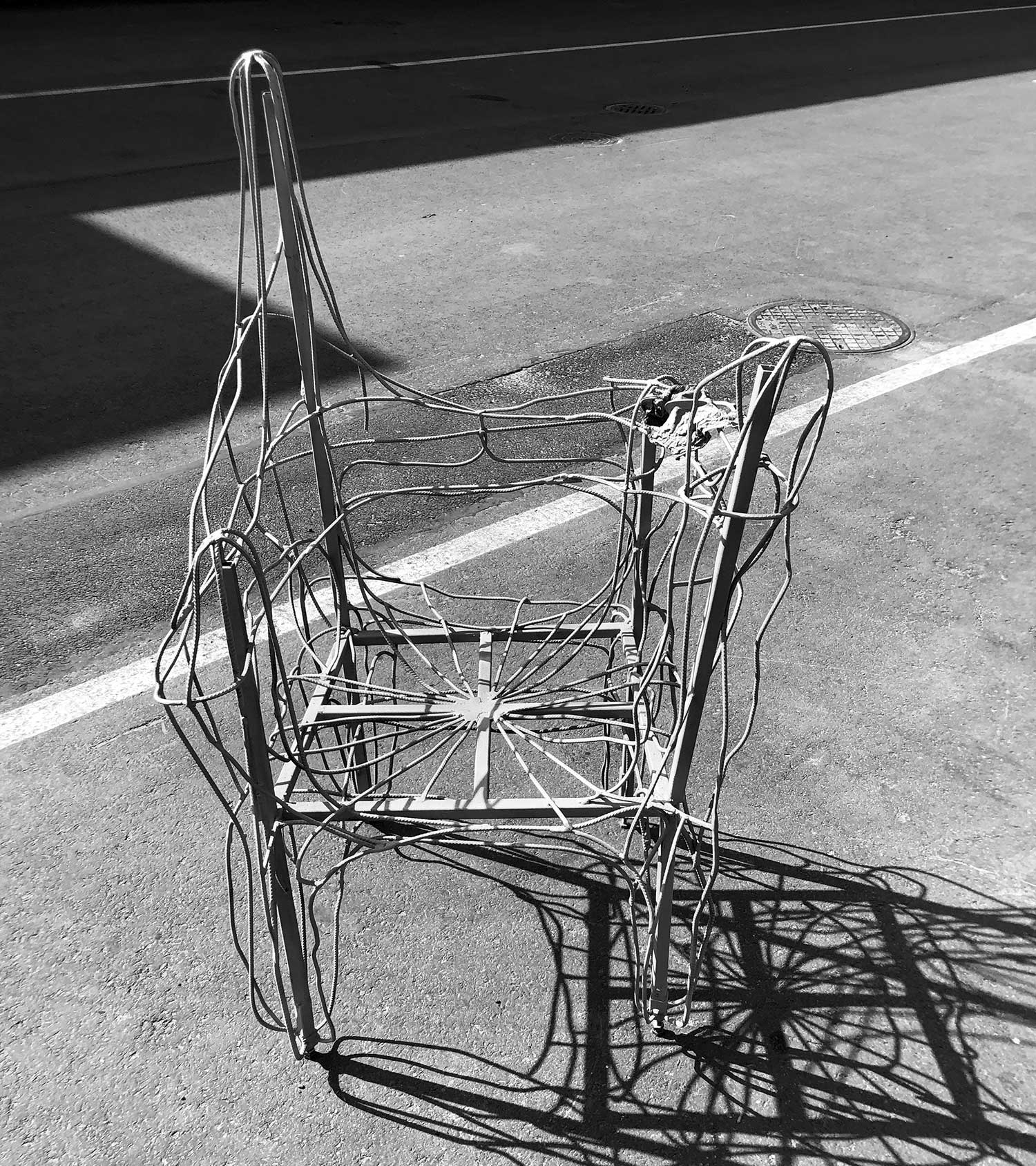 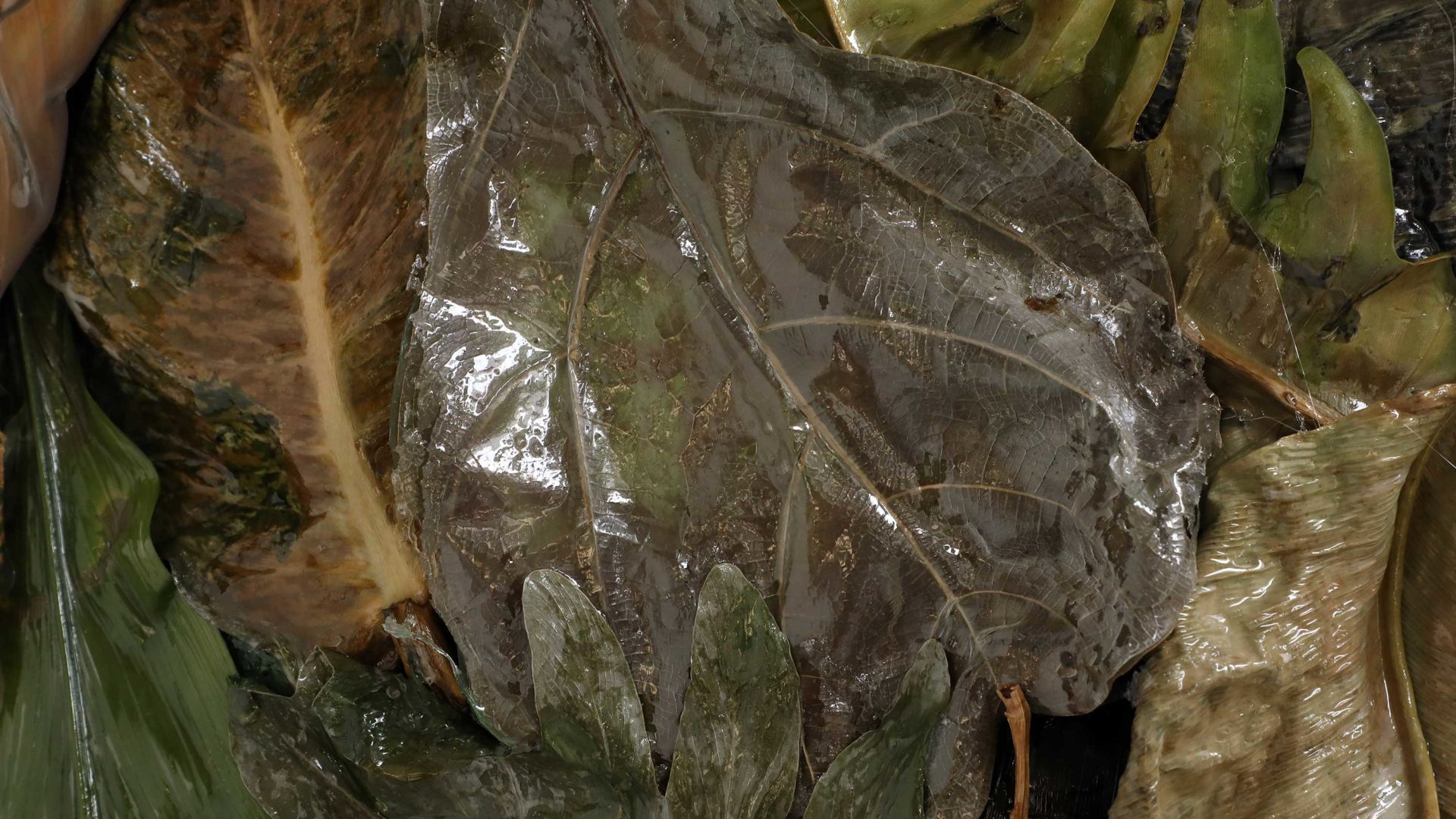 There must be a hidden skeleton within. A bodily scaffolding reminiscent of nothing but an abstract, metal ribcage – an entity yet to be born. The convulsive shapes of the wire veins which become intertwined with one another creating both surprising and familiar presence. Led by a chance of a human gesture they meander through an empty space until the anatomy is carved around it. Stunned and unable to name its bizarre familiarity, one is forced to wait and observe as the metal structure becomes wrapped with a sparse weight of the natural tissue.

Grown thousand miles away from where they were once sold, the discarded leaves fold their fleshy fins around the metallic bone. With time, their grip becomes tighter as they shrink and collapse in order to become its inherent organ. Through this progressive decline the object is given its most fragile layer. The leaf is no longer an ornament – having lost its recognisable appearance it has become an ephemeral landscape of veins, curves and cells.

The organic tissue – once a motif curved in wood – becomes the timber itself. The closer you come the more complex it seems. Its form ceases to be unequivocally described – organic yet studied, decorative but ultimately raw. An ornamental function has been replaced by an abstract form highlighting its own rigid materiality. The organism carved in time and space overwhelms with its sharp, verdant features. But the matter is in constant flux. As the early stages of decay set in, its palette changes from vivid greens to bronze and delicate ochre. The silence is scratched by the dry whispers of foliage transforming and melding until it becomes one compact, mute tissue. In this violent transformation the collapsed and shrunken skin has became very fragile and brittle. If not preserved this radical fall will continue until all matter perishes, and the bony structure once again is exposed.

The organism is therefore given a second skin. This time human gesture is prolonged through a post-industrial machine. Tiny droplets of burning metallic rain cover the organic surfaces, creating an intrinsic sculptural fingerprint. In only few seconds, the perishable leaf is preserved in a metallic cocoon, which will carry on the memory of its past form, long after the plant itself has turned into dust.

It is only now, when the metallic fossil has emerged from the slow process of creation, one can understand its enigmatic familiarity. A frozen and reshaped memorabilia referencing17th century furniture emerges before you – constantly becoming and carrying on the memory of time, space, material and the creative act.