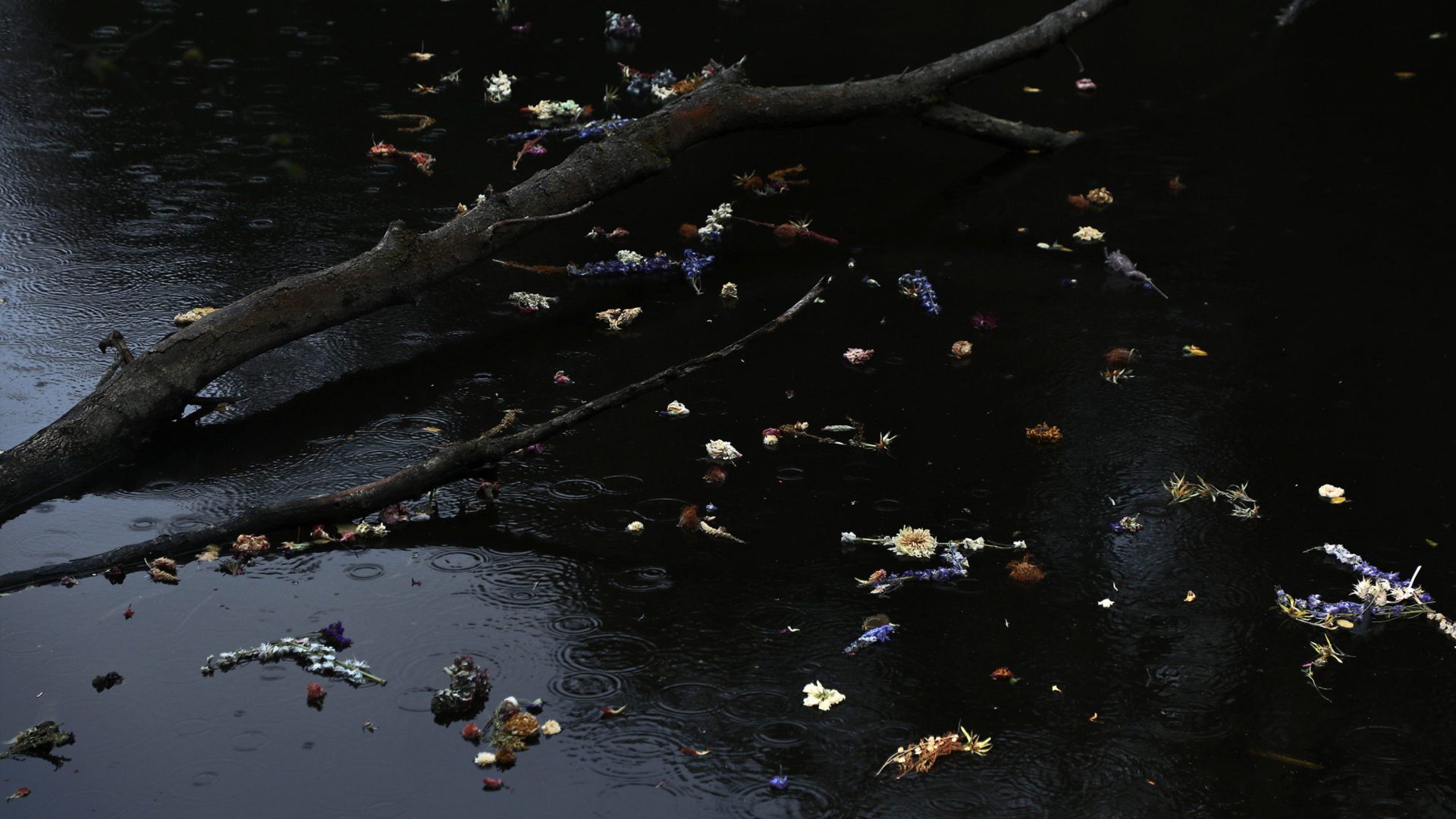 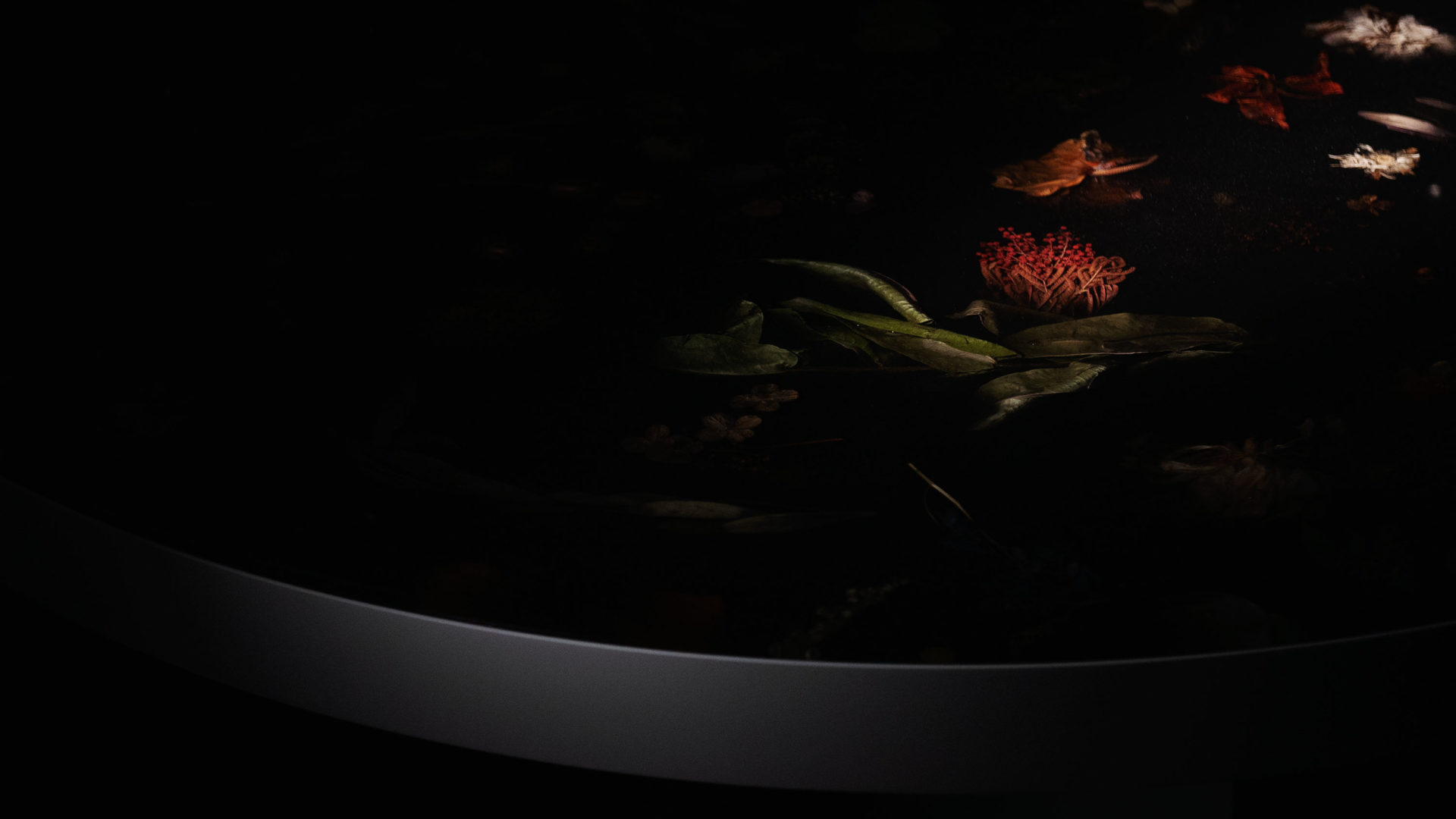 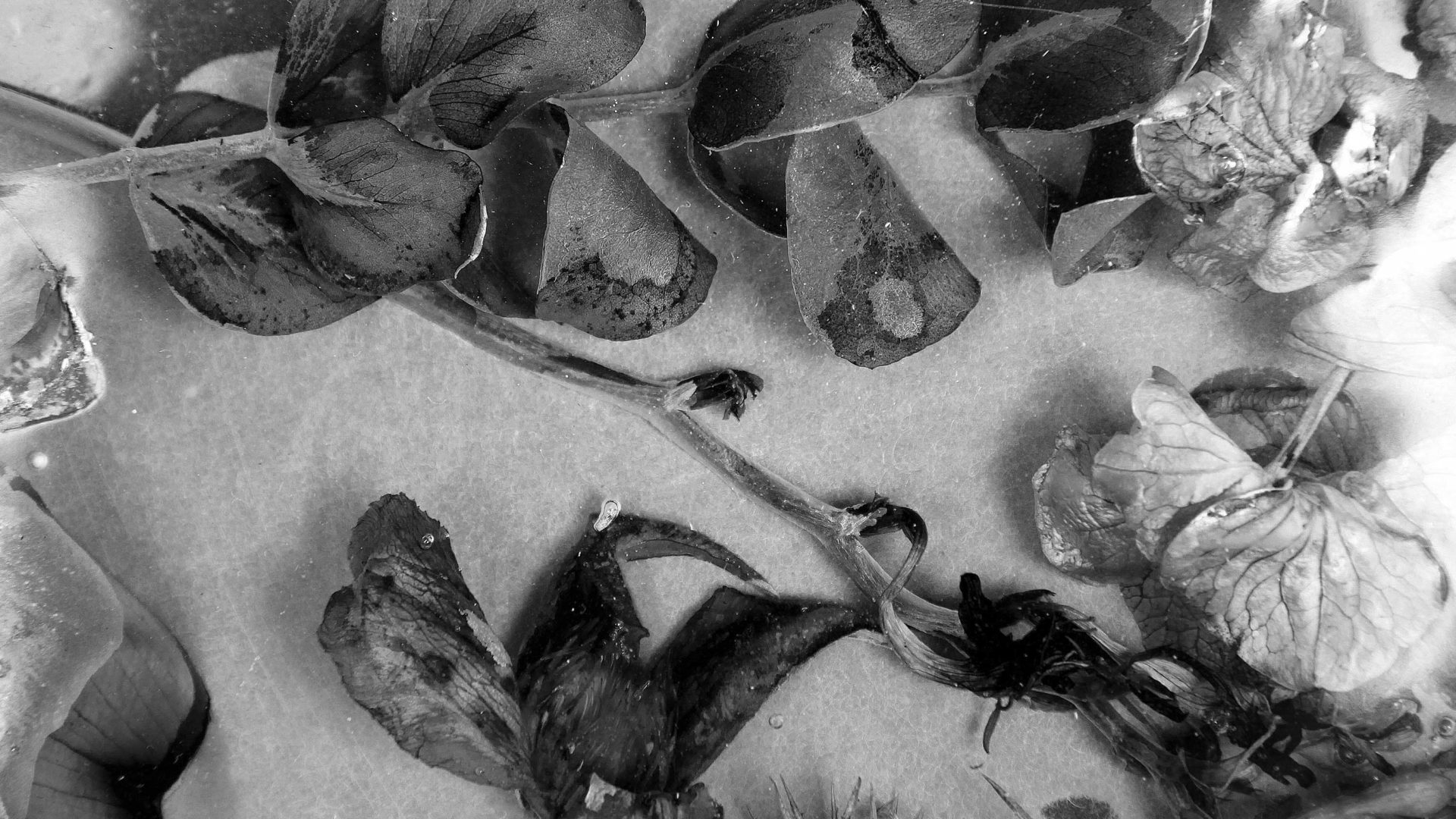 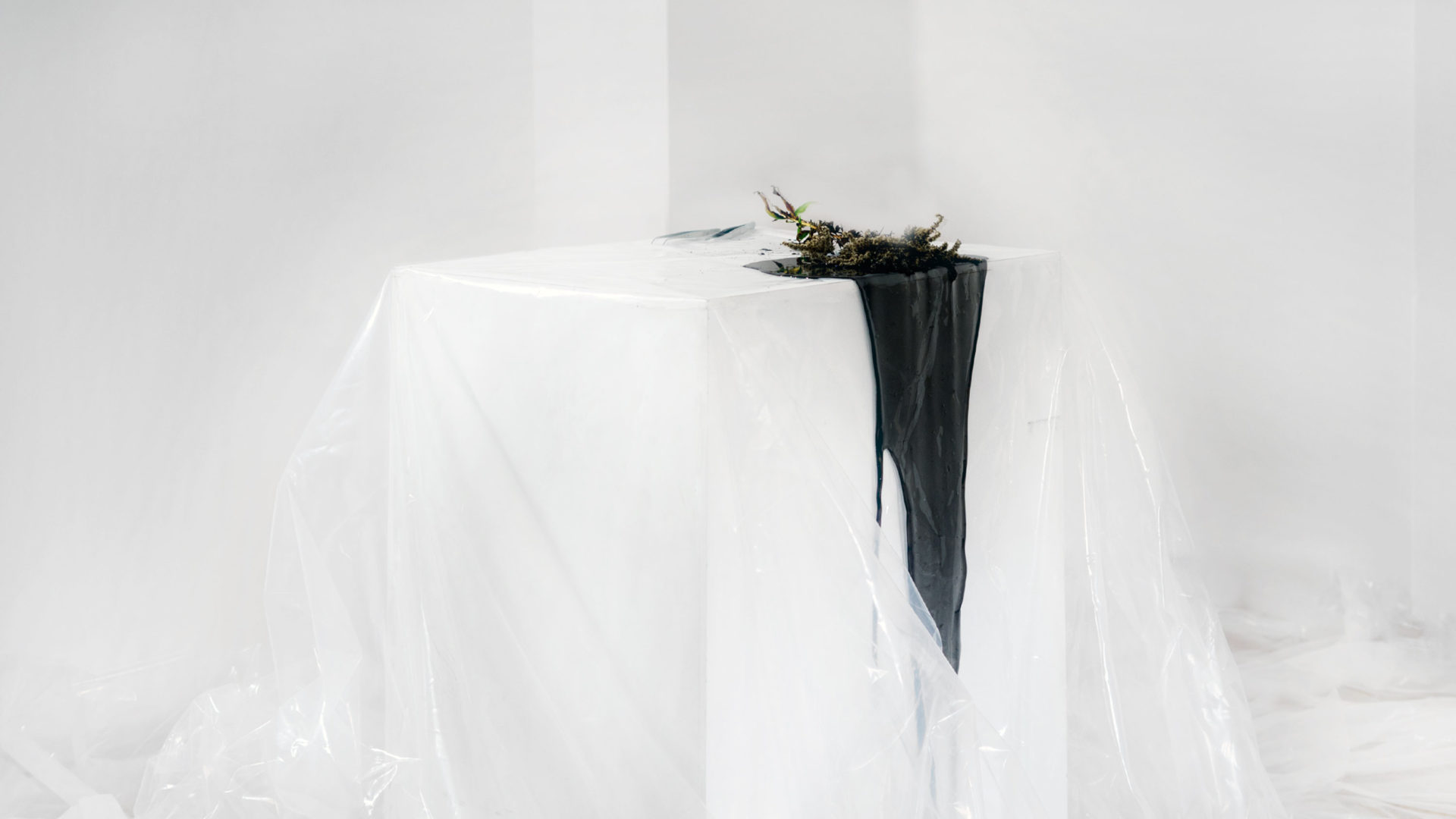 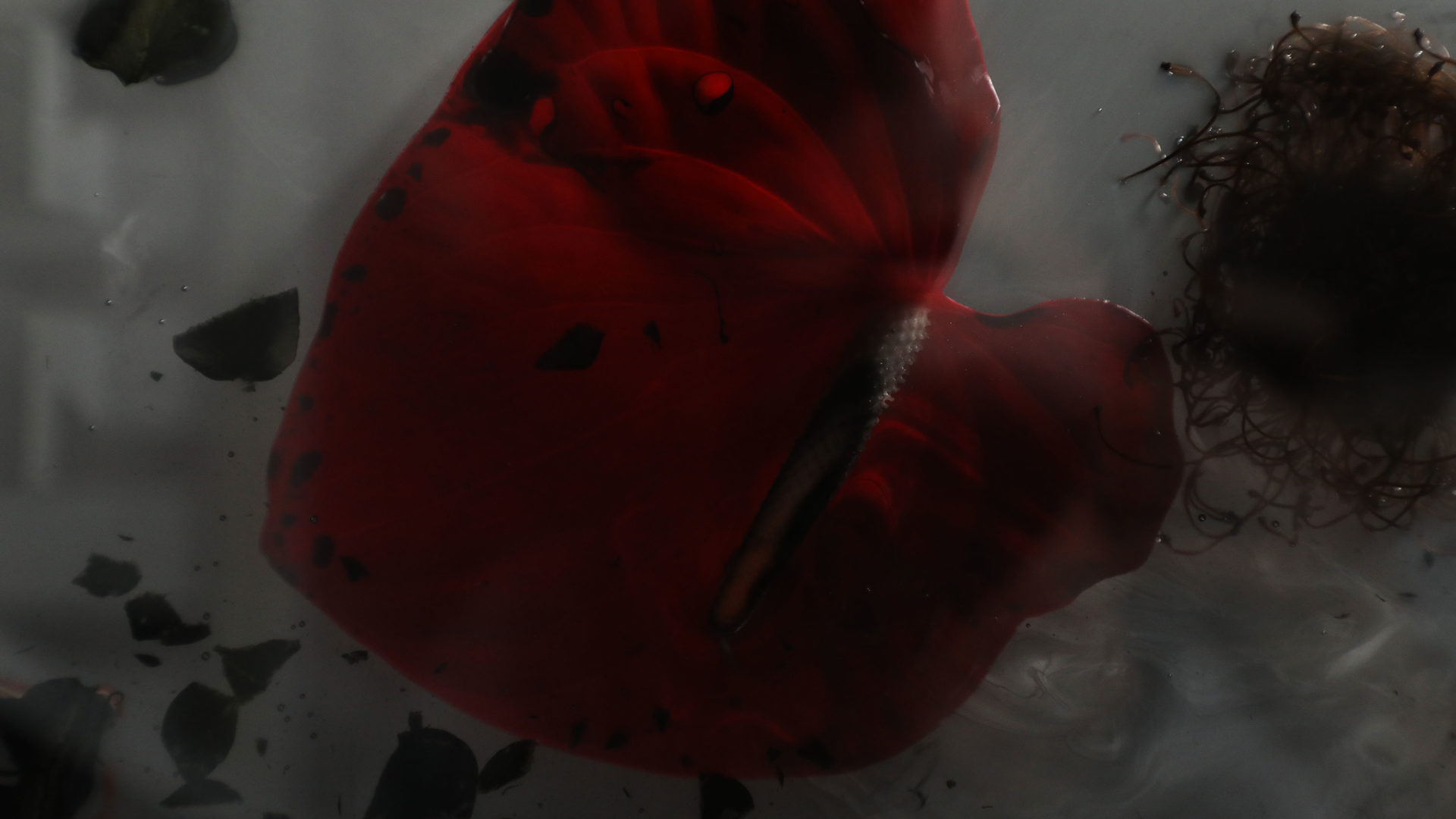 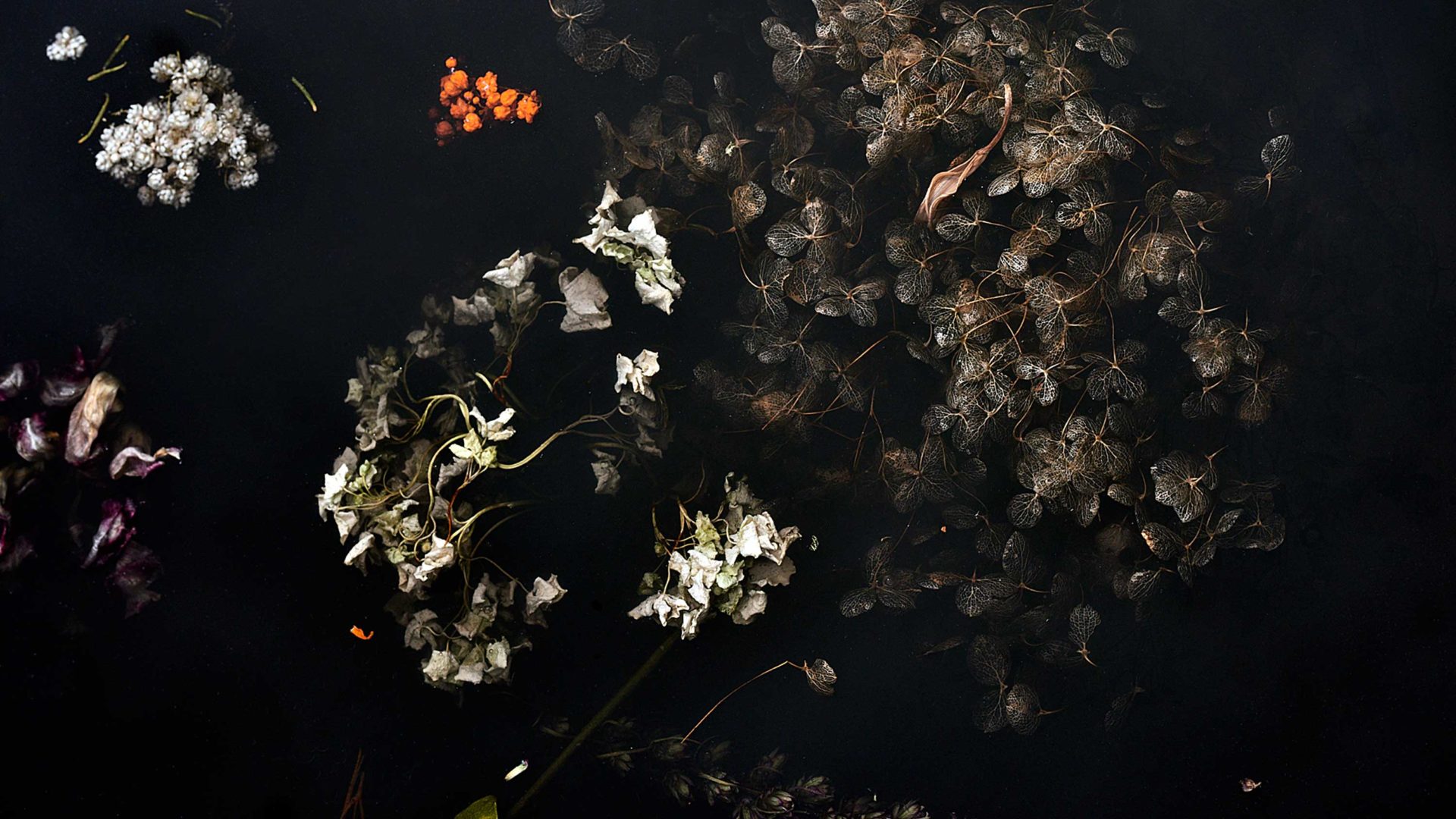 The ceiling have filled with the thick and black clouds. No light could penetrate them. The dark vapour amassed under the arched dome until it became almost palpable. As it became too abundant to withstand its own weight it began to condense in a form of the black rain. It was not heavy, but consistent. The black droplets kept falling down from the ceiling, leavening the fertile grounds and floors. But the earth could not withstand such plentitude and became soaked with the black liquid. One by one, the ponds began to shape. Theirs cyclopean eyes turned towards the expanse od the ceiling. It seemed their multitude could soon turn them into lakes, and those into seas and oceans.

But the storm stopped. As the waters calm their surfaces become sleek and calm –

once borderless, they are now defined by a fine, metal line shining from the darkness. As the dark pond of resin solidifies, a multitude of colours begin to appear.

The flowers which rejected from earth, are pushed towards the light gradually resurface in the thickening black matter. You can now see how shallow is the pond. As the light begins to struggle through the darkness it slowly uncovers the plants suspended in the dark enigma of time and space. Moving slower and slower, the matter thickens filling its wide borders to the brim. With time both flowers and light find it harder to struggle through the darkness. It seems it was the stillness of air which solidified the resin, freezing the plants within is stiff arms.

In this manmade climate, two types of environments are formed. The initial urge to incorporate the natural world in decoration by preserving, rather than representing, transforms into micro-environments encapsulated within their resin vessel. The two share a common origins, but are represented by radically distant qualities. The first one is stable, calm and silent. The plants within are permanent – they linger, suspended in time and space like the Flemish masters on the museums walls. This peaceful environment leaves them forever mummified, in their finest momentum. Their ephemerality have been successfully preserved, and stretched into eternal blossom. Nothing will break their explosive silence.

The second, is one of the flux and change. Bacteria introduced to this ornamental environment begins to penetrate the tissue within. The vegetative matter begins to transform and mutate. The material is a side effect – it evolves over time. Its creation is not mechanised not orchestrated. The environment susceptible to evolution allows it to continue living within its enclosure, until it finally shrinks and disappears, replaced with the light filling the negative space of floral cavities.